Original & Translation, from the Persian, by Ali Asadollahi

What if he wakes up           with tattered skin?
With one of those overalls
And instead of “Morning!” turns his neck to check        if it works yet
Shakes his legs and remembers.

Gets out of bed -these are vital of course-
It is vital to loosen your skull’s screws sometimes        and hold torchlight on it:
Through a heap of heavy bellies, sweaty thighs, piled up breasts
Put your hand in
To reach the hand you need.

A hand with a serum hole
From which a dejected ant returns to the light
Just as a sightless stain on a sterile wasteland.

The walls: White
The bedding: White
The nurses’ dress: White
What would you do          with a sky-blue square?

With a piece of metal-swarf in depth
With an eye blinking in a bowl of eye drops
-After every night, flashes of light-
An eye that shuts and opens in a Naphazoline laver
-After fireworks-
An eye for instance
An eye     just       between you and I
An eye with an evacuation order within sight
Behind the truck
Behind the welding goggles
The left eye with a speculum under eyelids, purged of splinters by tweezers

An eye -came out of punch machine’s gearwheels- in a zipped freezer bag attached to insurance records
The eye subjected to Article 7, clause 3, Note 4 of Military Exemptions Law
The eye scooped out by a spoon -as your body demands a new hole to be raped-
100-bucks-for-a-fuck eye
Punched-in eye
Poet’s eye
The eyes wandering in Tehran’s mean streets’ dirt-cheap shops
The eye that, in its limited perspective, sees two other feet behind his feet
Dry eye
Padlocked eye, opened with a pearl hunter’s crowbar
The eye half-raised, over the friction between grinder disc and metal
An eye which does not warn
An eye hanging from scaffold
A molten eye
An eye, that its yolk and white is stirred with a diamond drill
Fixed eye
Nerve-independent eye
Squint eye

No-eyelids eye
Bare eye
Thorough eye
The eye, which would be tucked up with a white cover; 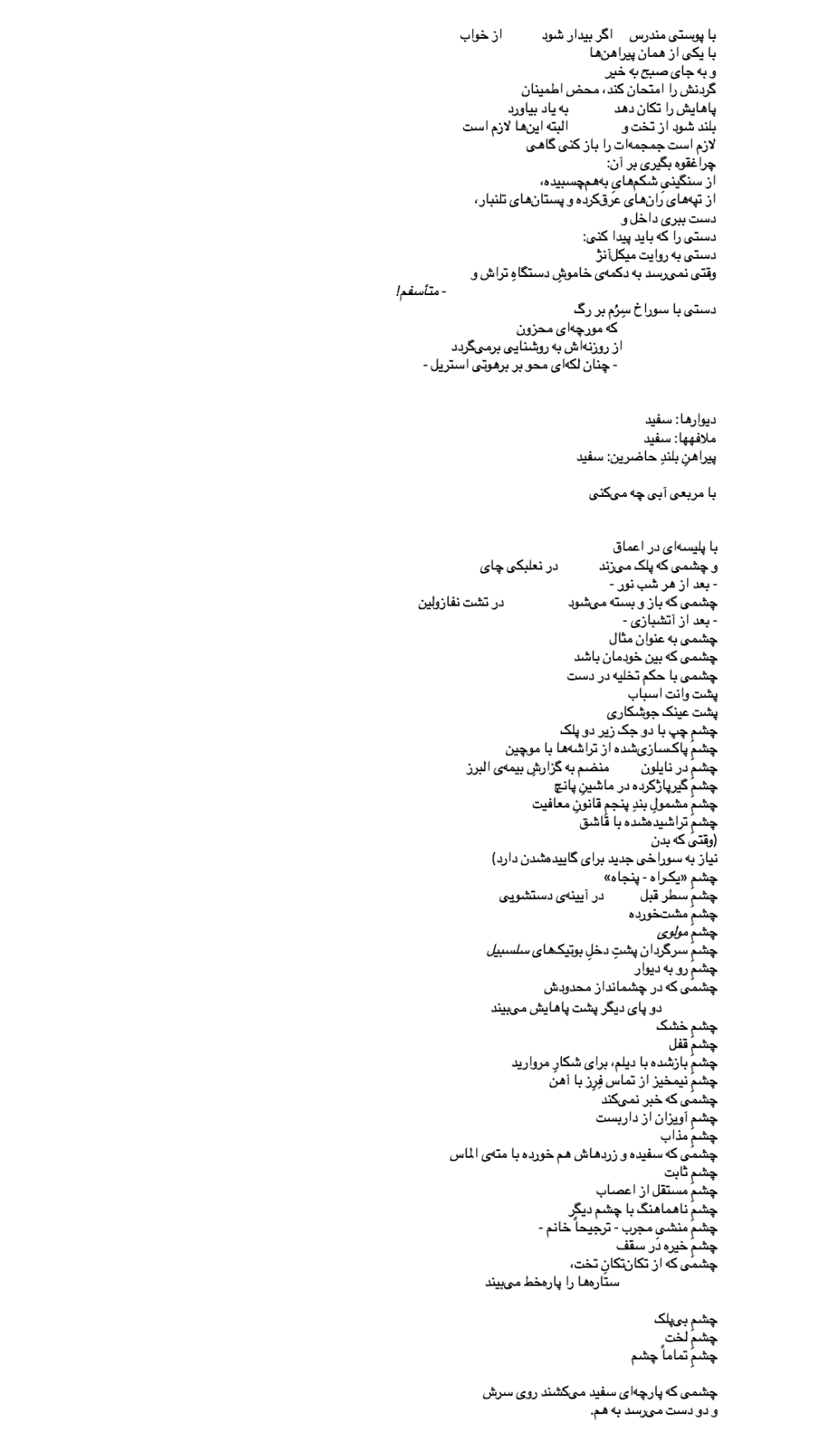 Ali Asadollahi is a ۳۴-year-old Iranian poet, who has published six poetry books in Iran, within a decade, and is the winner of some distinguished Persian poetry awards, such as Iran’s Journalist Society Award (2010). He is also a permanent member of the Iranian Writers’ Association and currently studying for an M.A. degree in Persian language and literature at Tehran University. So far some of his poems have been published in Roanoke Review, Palaver Journal, and The Persian Literature Review.

The original version of “The Labor’s Look” was first published in 2013, in Asadollahi’s third poetry collection, Penicillin.