TIJUANA: OVERCOME
“So what’s up, have you gotten over Adriana?”
“Simón, my memory was reformatted yesterday.”

TIJUANA: MEDICINE (vital code error)
“Doctor, how is my son?”
“He is fine now. He had a bit of an anomaly in his mental structure: a bracket was missing.”

By Edgar Hernández.
Translated, from the Spanish, by Pepe Rojo and Bryan Constantino. 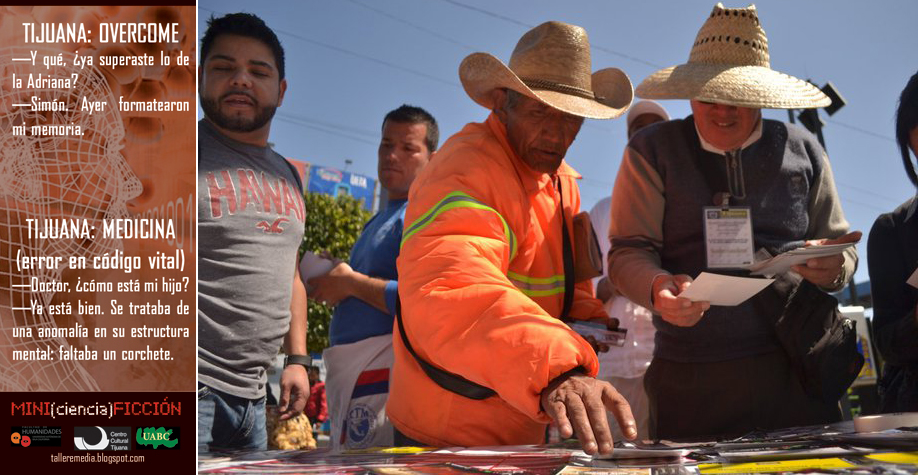 Edgar Hernández  is a Communications grad student from UABC, Tijuana.

Bryan Constantino attends UCSD and will obtain his degree in Mathematics this June. He lives in Barrio Logan and is working on his first Banda music composition. >iii=o

Pepe Rojo (1968) has published five books and more than 200 texts (short stories, essays and articles dealing with fiction, media and contemporary culture). He cofounded Pellejo/Molleja (with Deyanira Torres and Bernardo Fernández), an indie publishing firm, and edited SUB (sub-genre literature), NUMERO X (media culture) and PULPO COMICS (mex-sf comics anthology) for them. He has produced several interactive stories for Alteraction, and published two collections of Minibúks (Mexican SF and Counter-versions) at UABC, as well as the graphic intervention “Philosophical Dictionary of Tijuana”.